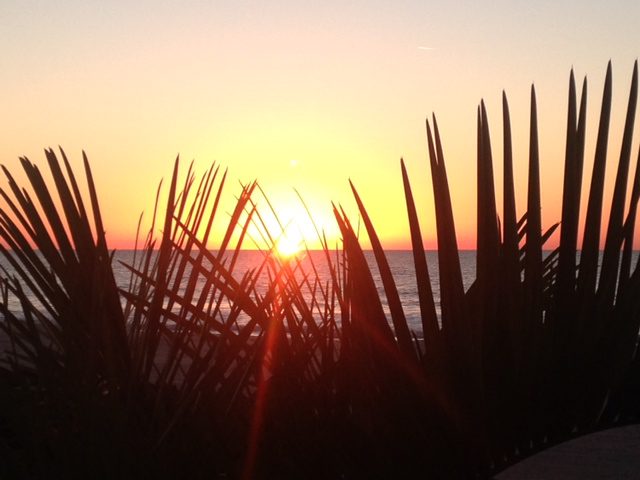 “Keep Fighting” or “Keep up the Fight” are common encouragements sent to cancer patients and caregivers, but what exactly does this mean?  My late husband Rich Conklin received these messages from well meaning family and friends countless times each day. Immediately following his diagnosis of colon cancer the encouragement was well received.  Those phrases brought hope during times of waiting, direction and clarity during times of confusion, and unity when we felt so alone. Yes, the meaning of those comments was clear and morphed into a battle cry to defeat the invisible enemy invading his body.

Our family was ready for war.  Rich was a collegiate football player back in his day and he stated, “Cancer is the toughest opponent I have ever had.”  Rich was mentally laser focused on beating this disease, and Rich, like so many, fought the good fight to heal his body, yet it was not until his tactics changed that authentic healing occurred.  We all know that fighting involves an amount of stress being placed on the body. A cancer fight usually involves chronic stress with episodes of a fight-or-flight response based on new alarming news from a doctor.  During acute or chronic stress, muscles tense, sugar is released in the blood stream, the dripping of cortisol harms arteries and disrupts digestion leading to GI issues, inflammation increases, potential heart issues may occur, and most notably studies confirm that too much stress over a long period of time can take a toll on your immune system, causing it to crash. All of the above are NOT good when you want your body to fight cancer.

One afternoon after receiving more bad news I walked to the mailbox, which I dreaded due to the bills piling up.  I reached into the mailbox and I retrieved bills and more cards. Rich opened each one and most had the comment, “Keep Fighting” from loving friends and family.  However, I had had enough. I asked Rich, “What would happen if we surrendered as opposed to fighting?” We talked about what that meant and what surrendering would look like.  Of course we discussed God, God’s plan, and letting Him do the fighting for us. Our job was to surrender to His plan. I heard in my heart, “Glory to God for His healing.” All of sudden we both felt the stress of the day slowly dissipate. We became more gentle towards one another and ourselves throughout the following days, found humor in the little things, made decisions out of love and acceptance, and we were able to find the joy of just being present and mindful about each moment.

That type of ‘fight‘ through surrender is much more conducive to healing than creating an inflammatory bomb inside your body by allowing chronic stress to captain your day!  These are the moments that bring me extreme joy when I think about Rich’s battle with cancer- the time we decided to surrender which opened our eyes to the abundant pleasures in our world.

I write this now based on recent conversations I have had with caregivers and survivors of lost loved ones.  Many of our stories have commonalities and we all have gotten to the point of surrendering, some later than others.  Surrendering does not mean one does not want to get well, it actually means you are fighting right by giving your bodily environment a chance to destroy the cancer cells and recover.  At HCB2, we strive to create environments where cancer is challenged to survive. Educating about the importance of decreasing stress and inflammation is a large part of our work. I share this with you as encouragement to find ways to release your grip on the negative and what the world pelts at you each day.  Whether you are challenged with cancer or burdened in traffic, exhale, find the beauty around you, and be thankful for the moment. Your spirit is strong and capable if you just give it a chance to comfort you. BTW, cancer hates that!

Blog
← We’re Strolling through our Colon!
Mind Your Minerals: The Importance of Magnesium →

Providing health care for the underserved population in the Richmond, Virginia area.

“I encourage anyone that has been newly diagnosed to be your own medical advocate. Find out as much information as you can, and share your story to create awareness around early detection and colonoscopies.”
-John Galloway

Tressa Breindel is a Functional medicine specialist and acupuncturist and the owner of InHealthRVA. She specializes in in-depth understanding of the underlying mechanisms of health issues from a biomedical perspective as well as a compassionate, whole-person approach to treatment.

Dr. Jenski is dual Board-Certified in Integrative and Holistic Medicine, Emergency Medicine and certified through the Institute for Functional Medicine

I am moved by the passion of our executive director and HCB2 founder, Mindy Conklin. The knowledge about this disease learned from her allows me to see the need for more awareness. While colon cancer has not touched me directly, it has ones that I love. HCB2 fills a void that creates a much needed conversation to enlighten people in our community about this disease. I am happy to be a part of the efforts of this organization by serving as an officer and board member.

I support Hit Cancer Below the Belt not only because colon cancer is the second leading cancer killer in the United States but also because, with proper screening, it is almost entirely preventable. It just takes education; making sure people understand that they have the power to ensure that colon cancer will not have a disastrous impact on their, and their families, lives. Also, this is something that personally impacted my family as my father was diagnosed with colon cancer and survived; I also had a grandparent who passed away from the disease.

Twenty six of my thirty eight years of nursing have been in Endoscopy. Endoscopy is my niche, my passion. I enjoy the fast pace, technical and procedural aspect as well as the variety of patient care endoscopy has to offer. Endoscopy has helped me become proactive by anticipating and responding to my patient’s needs. I have witnessed a lot of changes occur in endoscopy nursing over the last twenty six years, so patient education is important to me! I feel my job is to take care of patients-actually to take better care…to improve their care…to innovate their care. My hope is by serving on the HCB2 board I can do just that.

I have seen too many patients referred for services that I provide as a home infusion pharmacist from the initial treatment with the FOLFOX chemotherapy regimen, to possible parental nutrition, and finally home patient controlled IV pain pumps.  I believe that HCB2 can help educate the general population of the importance of screening, and increase patient outcomes associated with colon cancer.

I serve because I believe in the mission of HCB2 and its dedication to below the belt cancer prevention. From my work in the medical industry, I have seen the impact cancer has on lives. I’ve also seen what effective education can do for prevention. Based on this, I believe HCB2 provides an opportunity for me to utilize my personal compassion and commitment to helping people, as well as an opportunity to make a significant impact on the lives of those around us.

It is so easy to talk about all of the positive aspects of our lives. HCB2 helps make it easier to talk about the negative things that will affect us either directly or indirectly. Health problems and cancer specifically are very personal issues that can be extremely scary to deal with. Bringing these topics into everyday conversation and learning about ways to prevent, detect, and deal with cancer can help reduce the fear associated with it. This group gives you the forum to have these seemingly difficult conversations to help make a positive impact on the individual and community as a whole. I am honored to serve HCB2 to empower people with the knowledge necessary to detect, treat, and beat cancer.

At some point in our lives we will all be affected by cancer. This aggressive disease quickly turns deadly, killing far too many far too young. Our best defense is early detection, and that’s why I believe HCB2’s message is so important. As a proud member of the board, I strive to spread cancer awareness and prevention every day because it helps save lives–and there’s nothing more rewarding than that. It is my privilege to be part of an organization that is truly making a difference.

Since 1990, I have specialized in the field of Endoscopy nursing. I have been passionate about the prevention of CRC ever since.

I have been amazed with the advancements of the field of Endoscopy in my tenure.

I recall the ‘struggle’ with insurance approvals for colonoscopy screening in the early 90’s. I am so grateful for all of the work that has been done to support the prevention of CRC.

I enjoy serving on the board for HCB2 because it has given me the opportunity to utilize my clinical knowledge, expertise and passion to serve the community. I have been privileged to serve since the inception. Being a part of the development of several programs has been an honor.

I am most excited to be serving on the board of HCB2 for the opportunity to empower those we touch with scientific information that creates freedom from fear of disease and gives the ability to make informed proactive living choices. By providing vital information and creating events and activities in which our community can learn about preventative wellness strategies, the path is paved which leads to daily vibrant living – at any stage, at any age.

As a colon and rectal surgeon, I see the impact of colon and rectal cancer on patients and families. Anything I can do to help prevent the impact of this disease on fellow Richmonders, I’m all in! HCB2 gives me the opportunity to help support colon cancer awareness and preventative services for the community.

Renee Malone, MPH is the program director for HCB2. She holds a Master of Public Health degree and a Bachelor of Arts degree in Anthropology and Sociology. With a career that spans over 12 years serving populations in need, she joined the cancer prevention and early detection movement in 2010. Renee is particularly passionate about the nutritional, environmental and socioeconomic factors that affect cancer risk and overall wellbeing. In addition to her education and work experience, she has also personally experienced ill health and now better understands what can be done to support one’s own healing, even when it may sometimes feel hopeless. Ultimately, she is dedicated to helping bridge an essential information and service gap experienced by many in this community and elsewhere so that all may pursue optimal health as unimpeded as possible.

I serve on the Board of HCB2 so that I can be a part of a team of extremely motivated and like-minded people who are working together to support the mission of the organization and serve the people around us. I try and use my professional experience and personal connections to help us have successful events that allow us to engage with the public while raising funds to deliver additional services related to below the belt cancer prevention, education, and awareness. I appreciate the aggressive approach we take and continue to be impressed by the increasing results as we grow to do more!

I serve HCB2 to prevent cancer from taking away any more loved ones. Spending 20 years in the health industry has given me the passion and direction to empower community members to become proactive with their wellness. I want to continue to support others to make well informed choices which will positively impact their lives and the lives of their loved ones.